The future of mobile payments

Back around 2005, I was involved in user research for Nokia that explored the use of NFC technology on phones to do everyday things, like pay for public transport and purchases in shops. The study even reviewed accessing product/event information from posters; all someone needed to do was tap their phone against the section of the poster that resembled a computer chip and – presto! – they’d know when and where the next Banarama concert was, and how to buy tickets.

This capability felt so futuristic, yet to me it also felt like such a natural thing to do. Although I undertook this research 10 years ago (pre-Smart phone the iPhone was still a twinkle in Steve Jobs’ eye), phones had already become indispensable. We were carrying them everywhere.

Being a gadget tragic, but also an advocate for technology making life more convenient, I couldn’t wait for mobile payments to become commonplace. I love the idea of heading out the front door, leaving keys and wallet behind, carrying only my phone and being able to use it to pay for milk and bread at the corner shop (and maybe a chocolate bar) and unlock the front door when I get home.

It has taken a while, but now here we are in 2015 and using your phone to pay for stuff has become a reality (albeit a somewhat limited reality in some parts of the world).

Mobile payments around the world today

In 2011, it was found that the number of mobile payments made worldwide amounted to 7 billion. It then rose to 11.1 billion a year later. This number is estimated to reach 47 billion transactions in 2015.

The graph below demonstrates that Asia is leading the way in regard to mobile payment transactions. 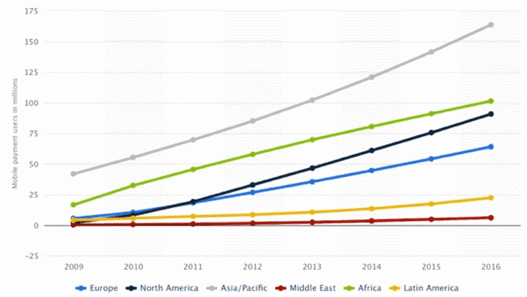 The high adoption of mobile payments in Asia is further demonstrated in the graph below. It shows results from a survey asking respondents whether they had purchased a physical object, such as coffee, via a mobile payment. 65 per cent of those who had said yes were from China while only 17 per cent were from Australia.

The reason why Australia is so low down on that chart is mostly due to lack of opportunity rather than interest. The landscape of mobile payments is likely to change dramatically once Apple Paybecomes available. iPhone 6 owners will then be able to make use its existing contactless payment feature at retail outlets (the iPhone authenticates transactions using its in-built fingerprint ID capability).

It will be fascinating to see how mobile payments pan out, and how banks (as well as other payment organisations) respond to Apple Pay.

From a user perspective, there is significant convenience in the fact that Apple Pay and other digital wallets allow you to register multiple cards regardless of the financial institution the card comes from. Mobile payments from banks, on the other hand, won’t be as convenient – as it is conceivable the user will only be able to register cards provided by that institution. If that is to be the case, users with cards from multiple institutions (e.g. a Commonwealth Bank personal credit card and a Westpac work credit card) will need to install multiple apps.

What triumphs? Convenience or security?

At U1 Group, we wonder whether this inconvenience will actually matter. Preliminary research indicates Australian consumers believe that bank apps provide greater security than a digital wallet such as Apple Pay. With this in mind, what will win – the convenience of having all one’s cards all in one place, or the peace of mind knowing your personal and financial information is secure?

Our experience suggests that it will come down individual preferences. To find out, we will be conducting an independent study focused on consumers’ mobile banking behaviours, attitudes and perceptions. Stay tuned for the results.